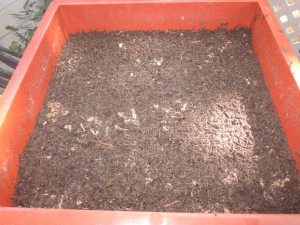 On Sunday, it was time for me to add the third bin to my Worm Factory 360.  I have had this bin up and running for the past 3 months.  The picture to the left is my bottom tray aka the processing tray.  One of the reasons I bought the Worm Factory 360 was because it’s supposed to be easy to harvest the vermicompost when it’s ready to be used.  The worms are supposed to migrate to the higher bins where the food scraps are being put.  This would mean there are no worms in the processing tray and I could just take the compost and use it easily…but this is not the case in my tray.  As you can see in the photo, there are quite a few worms in there.  I have read online that the way to harvest is to put the processing tray on top of the working tray (top tray), and then scrap the compost into piles which will ‘force’ the worms to move down in the bin and allow us to collect the compost. 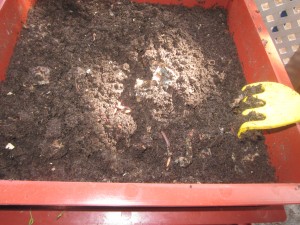 I tried doing this but was limited in time so I only took out half a gallon or so of compost.  You can see my attempt in the picture on the right.  I will add another post when I do the full harvest and show you what i mean.  One exciting thing that I noticed while doing this was that there are tons of worm cocoons which means the worms are comfortable enough in this environment to be able to reproduce.  I have also noticed that the worms are much bigger than when I initially purchased them. 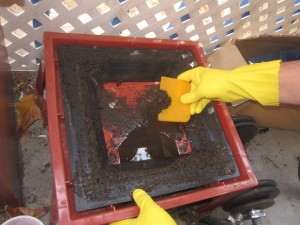 While trying to harvest the vermicompost, I looked in the collection area for the leachate and where the worm ladder sits for worms to climb their way back into the bin.  It was full of castings as you can see.  I put this in my ziploc bag along with the other compost to take to my garden and apply as side dressing to fertilize. 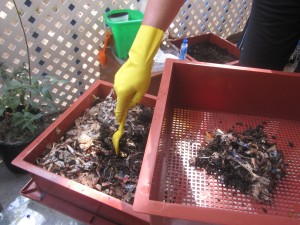 On to the new bin preparation.  Take a couple of scoops from your processing tray and throw it on the bottom of the new tray.  This is supposed to ‘jump start’ the new bin by providing some beneficial micro organisms and a few worms.  You can see I just used the rake that came with the bin and took from the middle of the bin.  I took some bedding and compost for the base layer of the new bin. 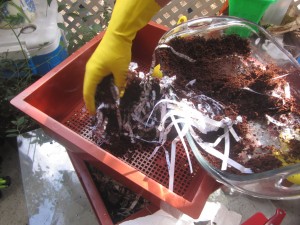 Your next step is to put in enough bedding to cover the bottom layer of the tray.  I still have some coir from when I first bought the bin, and I have been collecting shredded paper scraps for a while now so I put some of those in too.  You are supposed to soak the bedding for 24-48 hours but I’m not sure why.  I have not done this and will do it the for the next tray or when I have to add bedding to this tray again. 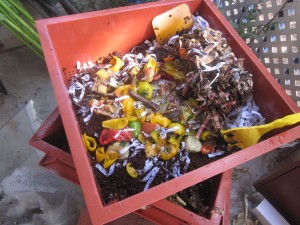 I then added a bunch of food scraps that I had saved over time.  Some of it was really ripe and that’s why I was wearing those sexy yellow gloves… You can see some pepper scraps, tomato pieces, banana peels etc.  They eat mostly anything, but we’re not supposed to put dairy, meat, greasy things, too much citrus, or a lot of grains.  You can also see that I took bedding out of the 2nd tray and moved it up here just so that this tray wouldn’t sit on all that stuff. 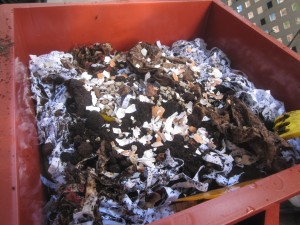 Once I covered the food scraps with the bedding, I added a lot of coffee grounds, egg shells, and the pumice that came with the worm bin.  I am not sure if I’m supposed to put these things on the food scraps or not… so I decided that I should mix it up the contents of the bin with the rake.   I was still careful to keep a lot of the bedding on top of food scraps to keep down the fruit flies. 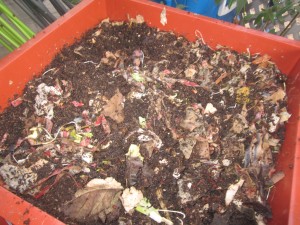 This is what the processing tray looks like now.  The new tray I just prepared will sit on top of this one.  You can see there is still quite a bit of work for the worms to do before this is useable.  That’s ok though, I’m not in a rush to use it since I have a whole other tray of compost to use. Below is a picture of a lot of dry bedding on top to keep out the flies as well.  Hope you enjoyed the post.  I have another one to make for what I did with the harvested compost…coming soon! 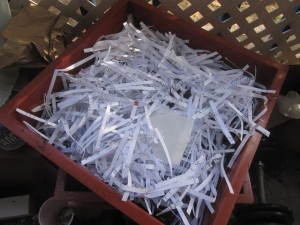