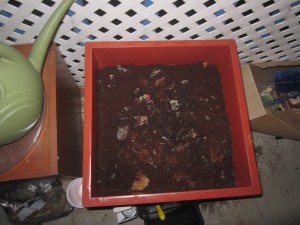 It’s been a while since I last posted about the new second bin on my Worm Factory 360, sorry.  It took 3 days for the first worms to move up into the new tray.  This might have been because there was still a good amount of food in the tray below that was still getting processed.  When I opened the tray on the 3rd day, there were quite a few fruit flies in there.  I think this is because I didn’t cover the food with enough bedding. The picture on the left is what it looked like on Sunday.  Most of the food was gone and worms were in the bedding. 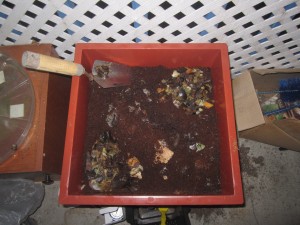 Here is a picture of the tray with some new food that I put in the corners.  I put the food in the middle the last time and I decided to use new locations for the second feeding.  When I talk about feeding, I give them food and also a bunch of coffee grounds.  In California, Starbucks has Grounds for Your Garden where they will leave 5 pound bags of coffee grounds outside for composters to pick up.  Don’t forget to add crushed egg shells around the food.  This helps with the ph levels and also gives the worms some grit to process the food.  Here is a picture after adding the grounds and egg shells. 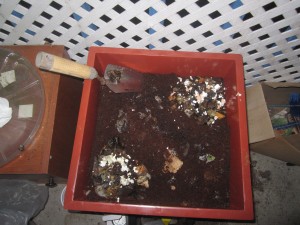 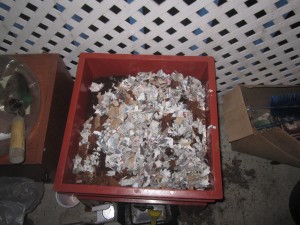 Since I don’t want anymore fruit flies, I decided to add more bedding over the food.  Bentley from RedwormComposting told me via email that you can never have too much bedding.  After I put all the bedding down, I had to water it down so that the worms are able to live in it.  You want it to be like a rung out sponge like everyone says.  That means it shouldn’t be dripping water when a handful is picked up, but if you squeezed the handful, some drops of moisture would come out.  Once you are done with that, you can cover the tray with moist sheets of newspaper like the directions tell you.  I will be checking on the worms tomorrow to see if they are ready for some more food. 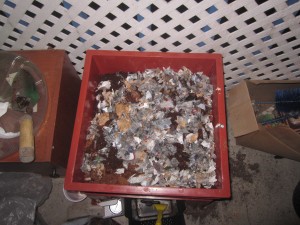