The Fall of an Empire

So many great empires hath come and gone.  It is quite fitting that immediately after posting about the spread of my zucchinis, they have met their maker. At the zenith of their power, like Rome before them, a barbarian horde in the guise of a white, filthy powder has been their undoing. Powdery mildew has arrived in my garden.

The white ghost crept in during the night, and the natural defenses of my plot were not up to the task of repelling the inital attack. I’ll get a couple pictures of the devastated plants up in my next garden update. The powdery mildew hit the zucchinis first. But it has since spread over to and devastated my cucumbers as well. Apparently powdery mildew is the bane of any zucchini farmer’s efforts for a healthy crop in Southern California. 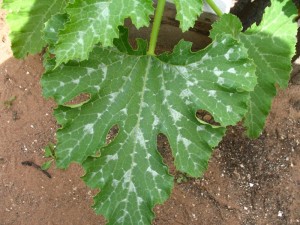 Powdery mildew is a fungal disease that affects plants belonging to the Cucurbita pepo family; vegetables like zucchini/squashes, cucumbers, peas, melons, etc. A very good, detailed article on the topic may be found here.  This wikipedia article on powdery mildew is also good but over the top. Powdery mildew is very prevelant in Southern California gardens. It occurs most frequently in late Summer, just in time to ruin your harvest, when things are getting really hot. That’s what happened here in the past couple weeks finally. Each day has been hotter than the one before, with temperatures hovering in the 90s. This heat wave has really allowed the mildew to spread quickly.

I first spotted the signature dried out white lines a couple weeks ago. I should have immediately pulled up my zucchinis, or at least cropped the leaves, to keep the powdery mildew from spreading. Alas, perhaps I waited too long and now the leaves of both my zucchinis and both my cucumbers have wilted, yellowed, curled, browned and now fallen off. I don’t know if it has affected the taste of the cucumbers, but I also harvested my first cucumber last week, and it was very bitter, almost tasted soapy.

All is not lost however. I have been trying to combat the powdery mildew with a home made solution. I mixed one table spoon of baking soda, a half teaspoon of dish soap, and one gallon of water. Then I put it in a conventional sprayer that I got on Amazon. A couple hand pumps, and I get the leaves with a quick coating of this mixture. It sounds pretty nasty, to be eating soap. But think about it, you wash your plates with dish soap. This is about the safest natural fungicide one is going to find. Other options include neem oil, chamomile tea, and skim milk. I have not tried these options but would love to see anyone’s thoughts in the comments.

The key is to not overspray the leaves because that will cause run off of the solution. If too much of the solution runs off the leaves and into the base of the plants and seeps into the soil, it will start killing off the beneficial bacteria in the soil, compounding problems. So take care to only lightly coat the leaves with the spray if you are faced with this same problem. Also, it is important to realize that the spray will not just wipe out the powdery mildew but also beneficial bacteria from the leaves themselves. Assuming you successfully combat the stuff, you should get some helpful bacteria and lightly dust the leaves. Paul’s worm castings or compost would be perfect for this purpose.

I am starting to see positive results already. I finally got rid of some of the deadest leaves, and have reclaimed some territory from the powdery mildew on the leaves that were not too far gone over to the white side. It is really good to see this working and to harbor hopes of getting a few more zucchinis and cucumbers this summer.

I will continue to update everyone on the great Powdery Mildew war of August 2012, and the zucchinis battle for garden supremcy. Wish me luck. 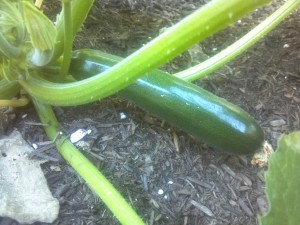 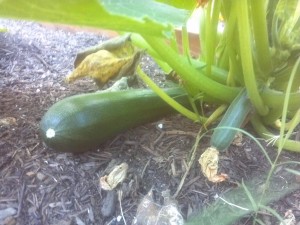 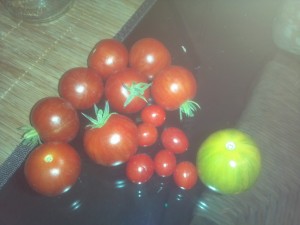 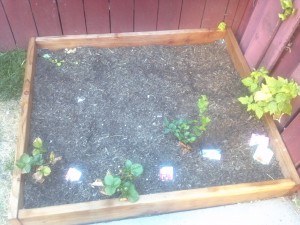