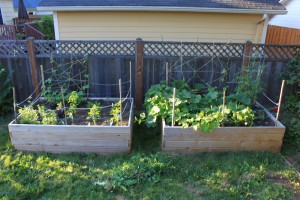 A little greener than before

Well, summer is here – we’re enjoying the Portland weather for which we endure the other seasons: sunny skies, not a cloud in sight, highs in the upper 80’s with lovely 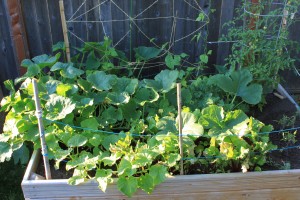 cool evenings. (But don’t tell anyone – just talk about the rainy season so people won’t keep moving here…) Ky and I went backpacking last week down in SE Oregon and came back to a garden explosion.

The spaghetti squash has gone crazy. I’ve chopped long stretches off it to slow it down but it keeps going 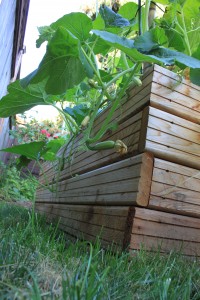 This thing would be 20 feet long if I let it.

nuts, spilling out of the garden box and covering the  whole garden box. There are at least a dozen squash growing, and the cucumber in front has a few growing as well.

I may be more excited about the jalapenos that are about two inches long in the other box at this point. There are quite a few peppers on all the plants, and more flowers coming along too. I’ve trimmed several cups of cilantro too, just wish there were tomatoes and I’d have salsa! Not too much longer for tomatoes, but still getting them from the store for now. The tomatoes I planted from seed are not doing so hot – I don’t know yet whether they’ll catch up or if I should give up on them and get some tomato starts. Next year I’ll start them early inside, or maybe even a greenhouse of some sort. 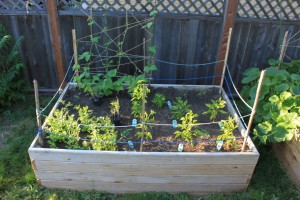 A little slower but still coming along

Next up for this summer is putting some boxes together for the front yard. I really want to have some strawberries but I’m afraid the dog will pull them if they are planted in the back yard so that’s a good incentive to get it done.

That’s all for now – cheers!

Squeeze the lime wedge into the Tecate, discard. Add the pinch of salt. Enjoy.

2 thoughts on “Nates Portland Garden – A month later in Portland”