My garden is really shaping up nicely. Below are some pictures of Agridude Paul and me doing work (Rob & Big style) back on the weekend of June 8-10. It was pretty much a full weekend project creating new plots to expand my existing garden. Work started on Saturday morning when my girlfriend Jilly and I made a trip to Lowes and brought back half the store. My small ass car was overloaded with gardening supplies – plants, wood, dirt, mulch – for the expansion. 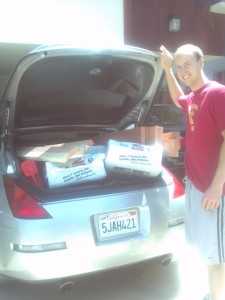 The Lowes was only a couple miles away, but driving with the hatch half open made for an interesting trip home. Side note 1: Lowes is awesome and way better than Home Depot or Orchard Supply Hardware. The people are extremely helpful and did a great job cutting the wood we bought down to the right sizes. Originally I was planning on cutting it all by hand. Thank God I had a sensible woman along with me to “ask directions” or this weekend project would have turned into an all summer extravaganza. I would have tried to nail the garden boxes we built together instead of using brackets. The whole project would have been a disaster. The people set me up with some brackets and screws that were much easier to use. They really know wood over at Lowes, almost as wells as the ladies of the night that walk that same stretch of Pico. They set me up with some untreated red cedar, which is naturally water resistant and won’t leach any nasty chemicals into the soil. Nobody wants to eat wood treatment infused veggies.

The first step after unloading the Lowes plunder was to get the area cleared out. This is one of the expansion plots before work began. Notice the nasty bush thing in the background. It’ll soon disappear from the rest of the pictures. 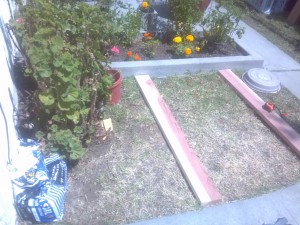 Getting rid of the plant was easier than I expected. It’s roots were deep, but not deep enough to sustain the ever popular “grip it and rip it” attack my gf and I employed. 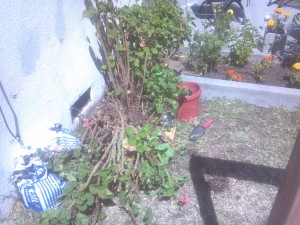 We found some interesting junk in the remains of the bush. It had been swallowing ping pong balls for years. Many a beer pong tournament was ruined by this ever absorbent foliage vacuum. 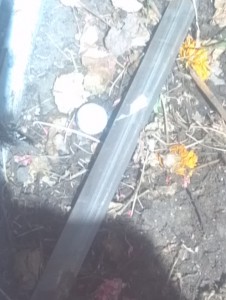 After discarding our “Kill,” as we took to calling it, we started building the first garden box. The boxes stand about 6 inches high, but we planned to bury them about ½ inch down below the sidewalk level. Assembling them proved easier than I expected. Although by the time I had screwed all the corners together, my girly computer hands were looking more like a true Agridude’s; blisters everywhere, and that was with gloves. 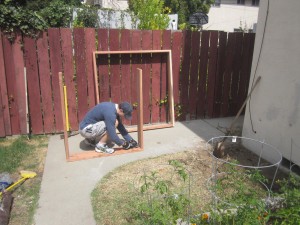 That was the end of our work on Saturday. Agridude Paul and his gf had come up from San Diego, so we had to break and get ready for Kings/Devils Game 5 of the Stanley Cup and the Pacquiao v. Bradley fight. Side note 2: June 9, 2012, was possibly the worst day of sports in history. Triple Crown contender I’ll Have Another withdrew from the Belmont, with much less controversy than deserved considering his trainer is given to blood doping. The Kings and Boston both lost in crappy games, and nobody likes seeing LeBron win. And worst of all, the judges went straight klepto on Pacquiao in the worst decision in boxing history.

Day 2 –  CAUTION: I know this is a gardening blog, but right now I need any vegetarians to avert their eyes. There is some serious man beef in the pictures ahead. 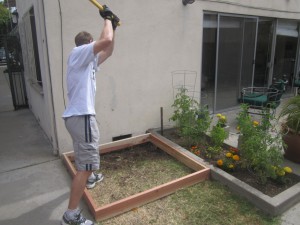 After a momentously disappointing night of sports, Paul and I woke up super early (10:00 a.m.) to start working on the expansion. First things first, we started tearing up the grass so that the roots of the newly bedde 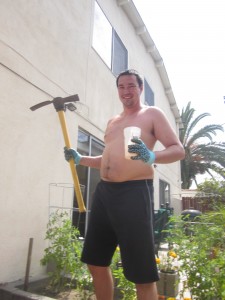 d plants could get all the way through to pay dirt. 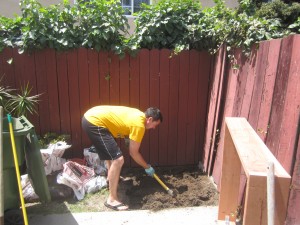 While Paul was getting his inner miner on, I assembled the second garden box. Then we put the boxes down and filled them with dirt.

Here’s a good picture of what the second expansion plot looked like before we put the second box down – right side of the photo in the fence corner. 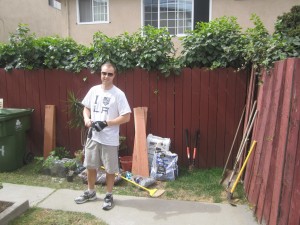 After the boxes and dirt were down, we cut out to go pick up some additional plants, dirt, and seeds at the local 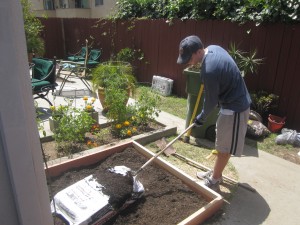 Orchard Supply Hardware. OSH is a poor impostor of Lowes, but it did the trick. I had to call it a day at that point to go to something called The Taste of the Nation. This is the greatest event in life, a charity event that has all the best restaurants in LA serving their favorite dishes from stands – all you can eat and drink. Hopefully by next year they’ll be sourcing from our gardens. While I was gone feasting, Paul planted all the plants and seeds we had picked up. Thanks buddy! I’m not sure how he managed this given that by the time we finally got to planting, Paul was already two bottles of champagne deep. Nothing says Sunday gardening like mimosas. 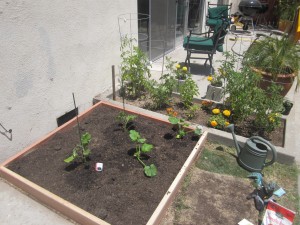 So finally, here’s what the post-planting finished product looks like.

The box that went down right next to the original plot has zucchinis, egg plants, and onions. The other box over by the fence is filled with rows of lettuce and spinach seeds, strawberries, blueberries, and raspberries. Paul also put down some onions in the Patriotic Plot. 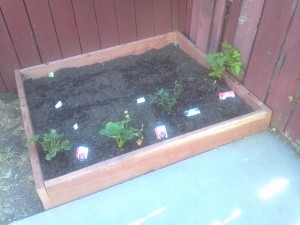 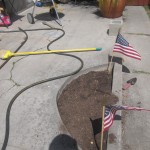 That was it for that weekend. Here’s some additional pictures of the tomatoes at that stage. Spoiler alert for my next post, the tomatoes are killing it. Paul put down some tomato food around the base of each plant, and they started growing buck wild over the next few weeks. Jilly and I just did our first big harvest a couple nights ago, and I’ll get those pictures up soon too. 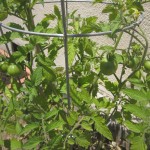 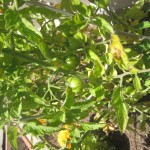 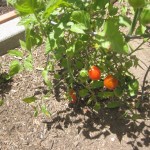