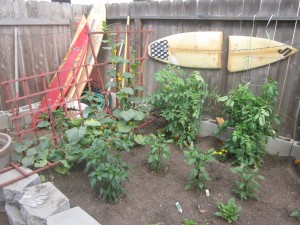 Well, it’s been a few days since I was over at the garden.  I had my cousin Liz and her baby Chester in town for a week.  I rode my bike over to the garden this morning to water the tomatoes since it had been a week since the last time.  They might not have needed it, but it was going to be a warm day and figured that they could use it. Here is the left half of the garden. 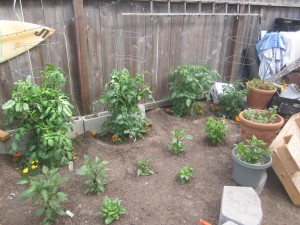 Here is the right half.  We have both slicing and pickling cucumbers on the trellis, 5 tomatoes lining the back of the fence, one giant jalapeño, 4 regular jalapeños, a serrano pepper, 3 uber hot peppers, mint, and strawberries (in the pots).  All the tomatoes are heirloom varieties.  We have Black Carbon’s, Omar’s Lebanese, Green Zebra’s, Tommy Toe’s (cherry) and Crnkovic Yugoslavian’s. 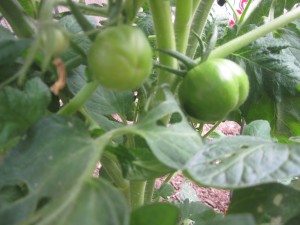 Today I noticed that we have a few green zebra’s starting to form, and a bunch of tommy toe’s starting to develop.  I am excited to see that the tomatoes are growing, but I am thinking about why the plants aren’t nearly as tall as they have been in the past.  There are probably many reasons, but I these are the ones that stick out to me so far: I planted later than normal.

This means I bought my seedlings at the nursery later and maybe that extra time gave the plants less time to grow larger.  I also did not stake the tomatoes when i planted.  I put cages on them probably after 6 weeks.  I normally do it when I plant, but they have grown so tall in past years that we were going to try to do a new custom cage, but never got around to it.

As mentioned earlier, we are growing pickling and slicing cucumbers.  They are off to a terrific start this season.  We have tons of flowers and the plants look very healthy.  Here are two pictures of the cucumbers that we have already, the single cucumber is the pickling, and the group of 3 are for slicing. 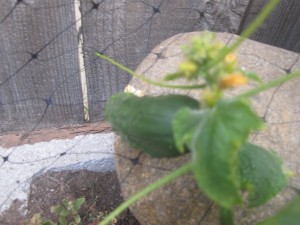 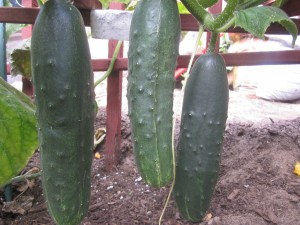 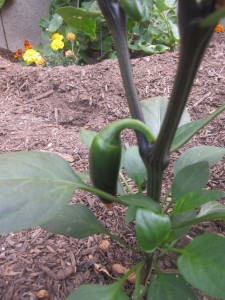 That’s it for now.  I’ll be posting some pictures of the harvested fruit when I pull them.  I’ll also flush out the 3 uber hot peppers that we grow.  I can’t remember the types right now…

One thought on “Cape Mayhem Garden Status Update – We Have Fruit!”