To address the problem of chlorine and other water treatment residuals in our tap water, the marketplace does have a few solutions to offer. One of the first things you will hear from your local hydroponics or aquarium store is “Reverse Osmosis!”

This method of filtration is one of the most thorough methods out there, perhaps second only to distillation for its effectiveness. This comes with several downsides, however. First, the unit itself can range from a couple of hundred dollars to over a thousand just for the parts. These units can quickly become a DIYers nightmare as they are usually made of plastic and replacement parts are hard to come by if you went the cheap route – and a professional install costs even more. Additionally these come with 3 to 5 stage filters, and each one of those must be replaced on an annual basis, adding to the expense.  Thirdly, in order for the unit to produce just 5 gallons of usable water, it has to flush over 25 gallons of waste water down the drain – to me this is unacceptably wasteful, especially considering all the steps that water had to go through just to get to my tap.  And finally, the real kicker for me, is that the RO process actually acidifies the water, dropping it down in most cases to a pH of 6 or lower.  This means that one must then add materials back into the water to make it a neutral pH so that it is safe to drink long term, to feed to your plants, to add to a fish tank.  For these reasons I’ve decided that for my needs RO water doesn’t make sense.

What about other filtration methods?  Well there are whole house filters on the market right now that are actually very good.  These are usually multi-stage units that don’t have the RO problem of having to dump waste water, and some of the filter elements are made to last several years.  But again, these aren’t cheap, and I need a solution that I can use in my tanks today!  Most of the shower filters, which you may be tempted to attach to your garden hose, are only capable of dealing with free chlorine – not chloramines – so I’ve ruled those out as well.  What we are currently using for our drinking water is a simple pitcher-type charcoal drip filter, which gives us a better tasting water and some peace of mind knowing that at least some of the chemicals in our tap are being filtered out.  The trick with these is to change the filters often – as once they’ve reached capacity on what they can take out of the water, some of those chemicals will start leaching back into the pitcher and your drinking water will actually contain more than from the tap!  These filters add up over time, but are such a small initial investment that it makes sense to use them for our drinking water.  My fish tanks however range from 5 gallons to 30 gallons right now, with some small planter vases scattered around the house, meaning I currently have over 100 gallons of fish tanks in our home – so I need a means of treating a larger quantity of water than our little pitcher filter can handle!  And it turns out that they’re not removing all the chloramine anyway.

It used to be that when you were setting up or doing a water change on a fish tank, you would just fill up your 5 gallon buckets and let them sit out, or “age”, for a day or two.  This would effectively remove all of the chlorine in your tap water because at that time the municipalities were using “free” chlorine – just like the stuff out of the bleach bottle.  This form of chlorine is volatile enough that it will simply evaporate out of the water over time.  The game changed when municipalities found that they could get a longer shelf-life for their treated water by using the more stable chloramines, which don’t evaporate and can’t be boiled out.  (Chloramines are actually chlorine bound with ammonia.)  This meant that on the consumer end we’ve had to turn to commercial water conditioners in order for our fish tank to survive a simple water change.

Long exposure charcoal filtration is an option I toyed with early on, but not having a cheap source of clean charcoal handy, and considering the waste it generates, I decided to keep searching.

Those of you who have brewed your own beer or made your own wine will know about potassium/sodium metabisulfite – or Campden tablets.  These are used for two things – removing chloramines for brew water to result in better tasting beer, and killing wild yeasts and bacteria to control fermentation.  This initially sounded like a possible way to take the tricky chloramine molecules out of the picture, but then I remembered that sulfites are added to kill small organisms that could result in spoilage of the beer/wine.  And in the fish tank, we need those organisms to process our fish waste so the fish don’t drown in their own excrement!

So this search was getting long and frustrating, but I knew that someone out there had to be doing aquaponics in an urban setting on a hobby level or larger without spending huge amounts of money per gallon of water.  And then I came across the idea for neutralizing chloramines with Ascorbic Acid.  That’s right, good old Vitamin C!  It turns out that people using home kidney dialysis machines have been using ascorbic acid to neutralize chloramines in tap water for as long as they’ve been used in water treatment.  Because chloramine is chlorine bound with ammonia, there is a small amount of ammonia released into the water which the biological filter, or nitrogen cycle, has to deal with.  The chlorine, when unbound from the ammonia, is now free to evaporate out of the water before it is added to a living tank – this process takes only a couple of hours.  As long as the treated water is added slowly to an existing tank the ammonia should not adversely effect the livestock present.  The only other by-product is dehydroascorbic acid, which is a form of vitamin C which is a nutrient of great benefit to organic life, and will actually increase the fish’s immunity to disease – just like it does for us humans!

If you’ve noticed, we’re adding an acid to our tap water, which is going to have an effect on the pH level of that water, so that is something we’ll have to monitor when testing if this actually works as claimed!  The reality is that the dose is small, about 1.7 grams per 22 gallons of water, or less than 400mg for a 5 gallon bucket.  Therefore our net effect on the pH level should not be extreme, and as a bonus my tap water is fairly alkaline – around 8.0 pH last time I took a sample – so a small downwards swing might actually be a good thing in my case.

In part three of “What’s in your water?” I will walk you through my real-world testing of ascorbic acid as a water conditioner, and give you some ideas on how to test your water – because knowledge is power. 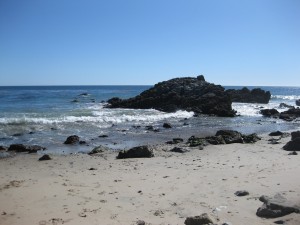