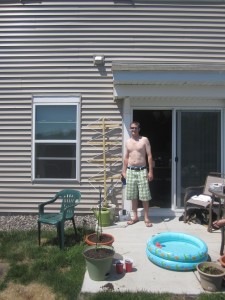 My name is Brian and I live in the northern suburbs of Minneapolis.  I have a small patio that I have been growing a few plants on since I moved into this condo two years ago.  I am a chef at Muffuletta in the Park in St Paul MN.  My co worker and I have saved some heirloom tomato seeds and sprouted over 200 this year.  I gave six seedlings to another Agridude, Sam, for his work garden.  I also have two on my patio, along with hops, basil, thyme, and some lettuces and spinach.  I haven’t grown hops before but I do brew my own beer so I am hoping to get some off of this plant so that I can use it in my beer.  I am trying to start a micro brewing company called Brown Bottle Brewery.  I will be blogging this season to show what I am able to grow.

These pictures are from May 12th.  Paul was in town and we had a perfect early summer day to hang out and catch some rays while having some brews.  We invited some of our friends and Paul’s family over to hang out too.  Here are some pics: 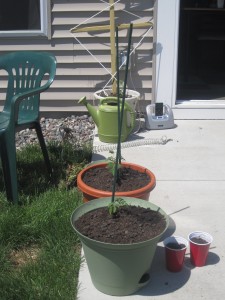 The two pots closest to you are my tomatoes.  I am growing two heirloom tomatoes that we sprouted from the restaurant.  I can’t remenber what types they are, but I know they will be small cherry like tomatoes

I made the trellis by myself to grow the hops on.  I bought the root from my local home brewing store  and I was told to only let two sprout.  One of them did not make it so next year I’ll try something different.  These are supposed to grow 2 feet per week so I should have some great updated photos for you guys in a few weeks. 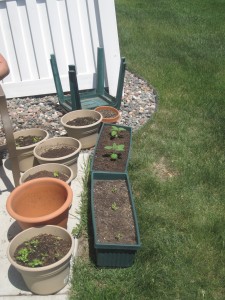 Here are some other planters that I planted lettuce, spinach, basil, thyme and two peppers.  I started these from seed as well.  My wife won a small green house at a work event raffle.  I am looking forward to having these at my disposal for cooking at home and work.

Here is a picture of Paul’s cousin Andy and our other friend Wyman playing bags/cornhole in the side of my yard. 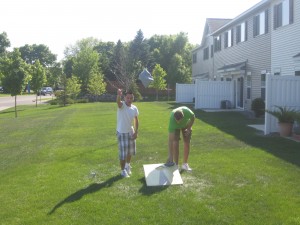