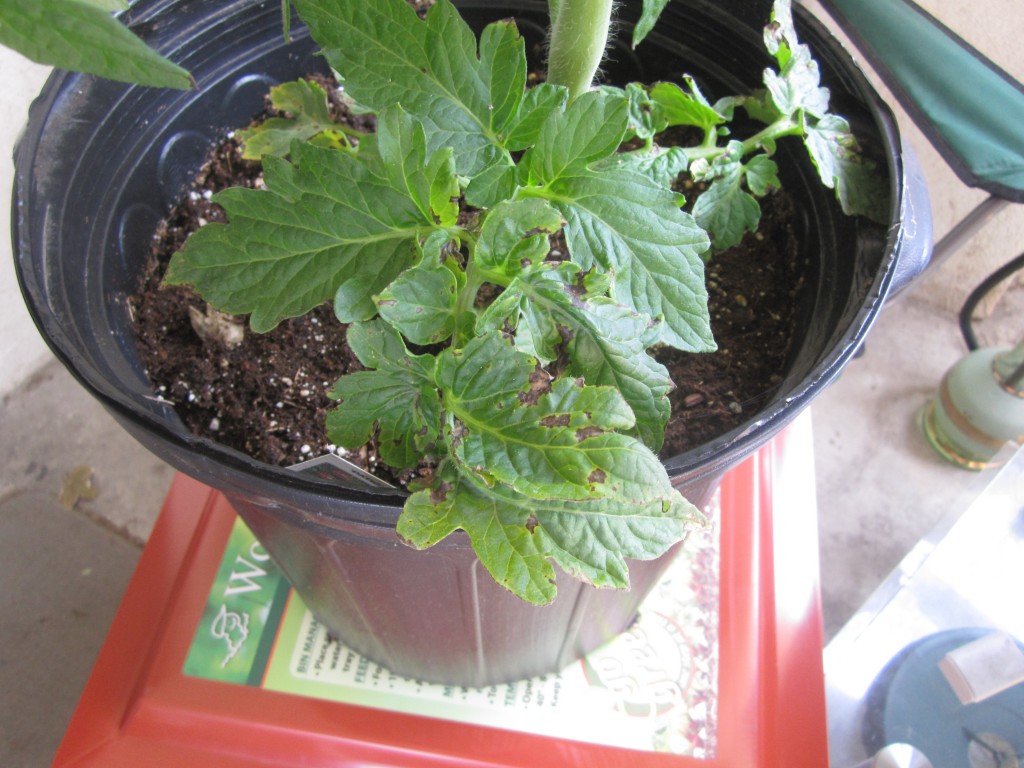 Pics from the garden in OB, SD, CA from 2011 with Jon Zuppan…the sexy stud. The tomatoes are pretty much as tall as they got last year. How tall do your tomatoes get? 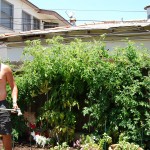 JZ getting his tan on while watering…. 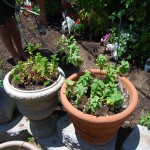 Sweet mint and Mojito Mint. They crossbred over the winter and now look the same. The Mojito mint tasted much better than the sweet mint. 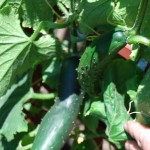 A nice cucumber… we relocated the cucumbers this year to get more sun and they are Blowing up. 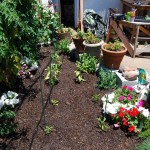 Different angle of the garden… 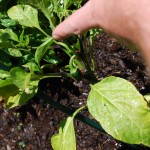 Beginning of a Jap’s life… 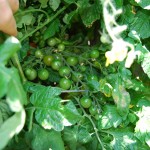 Just the beginning of hundreds of cherry tomatoes 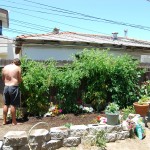 Mainly a shot of JZ’s butt… 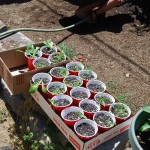 Plants from seeds that Paul was working on. I think mainly lettuce, spinach and peppers. 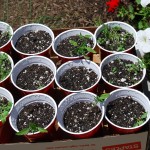 More of the same 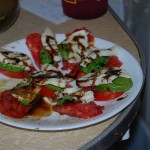 Finished product with basil from the stoop garden

Now that the blog is up, I wanted to post some pictures from Memorial Day.  We had fantastic weather for the holiday weekend.  We rode our bikes down to Sunset Cliffs in Ocean Beach and enjoyed the view. 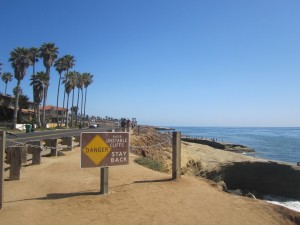 We biked from the cliffs to the garden and ran into another AgriDude, Jude, my old roommate.  He helped me a ton last year in the garden and has been helping me out this year.  He will be posting to this site as well, but here is a picture of him looking very AgriDudish on his bike on Newport Ave: 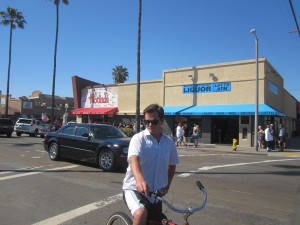 I had Kelly take a picture of me near the Ocean Beach pier.  I was having such a nice time being outside in great weather that I wanted her to capture it so I could show everyone: 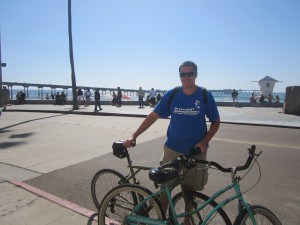 After the photo shoot was over, we continued over to the garden.  We brought over the beer pong table so we could play pong, watch the Celtics at the Tiki Bar, barbecue, and hang out at the garden. 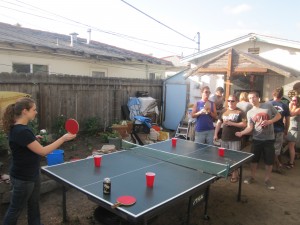 We had a nice turn out and a great time hanging out.  Hope everyone else’s holiday weekend was fun.

I should explain our garden set up in Ocean Beach in San Diego.  We are fortunate to have a friend that lets us garden in his backyard which is one bock from the beach, and 3 blocks from Newport Avenue (our beach towns main drag) that has tons of restaurants and bars to visit.  Here is a picture of our Ocean Beach Cape Mayhem Garden.  It is a 15 x 8 plot where we used pavers to create a raised bed.  Over the past 3 years, Vince has let me garden back here.  Each year I garden, I start off by adding a ton of new top soil, (man)manure and other soil amendments because we are gardening on sand which is tough to garden on 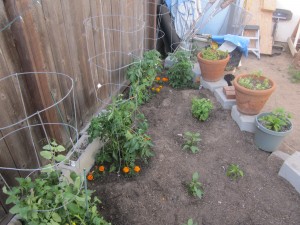 Each year, we grow 4 or 5 tomatoes, jalapenos, cucumbers, serrano peppers, strawberries, mint (for mojitos), and a few varieties of uber hot peppers ie Scotch Bonnets, 7 Pot Jonahs, Black Habeneros.  We have done some lettuces and spinach as well, but I do those on my deck at my apartment now.  (Ill be posting some of those pics in the next week or so)

The garden lies behind the dark green house near the camper in this next pic.  Be sure to notice the awesome beer pong skills of Mike and I. 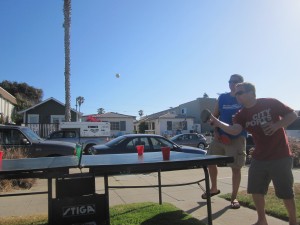 Our friend Vince that owns the place rents his studio to Old Man Peter from Boston.  He is a true AgriDude and you will be seeing pictures in the future of him.  One day in Feb 2009 when Pete had just moved in, he, MSR and I decided to build a tiki bar and create a garden.  After a few drinks, we made it to Home Depot (with a sober driver) to get supplies. With a hundred dollars for the tiki bar and prob another 75 for the garden, we had everything we needed.  MSR and Pete are huge Boston fans and they themed the Tiki bar with Boston memorabilia.  Here are some photos: 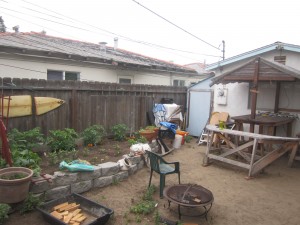 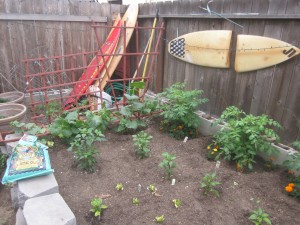 This year I planted the first weekend in April which is later than normal.  The previous two years I planted in Feb and then in March.  We are fortunate to have a great growing season in San Diego.  Here are close up pictures of some tomatoes and our cucumbers on a new type of trellising system this year.  We put a 1′ x 8′ ‘ladder’ style trellis horizontal from our pavers to the fence with the idea that they would grow up and along the ladder, but they grew fast and big and we had to support them with additional trellises to grow taller. 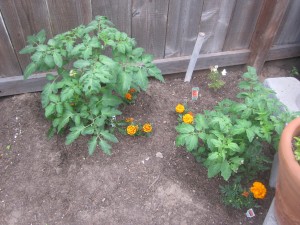 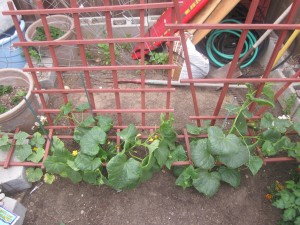 That’s a brief history of our garden in OB.  We will be posting some photos from years past.  I’ll also be posting some pictures of a worm bin project that I have to get some nutrient rich compost. 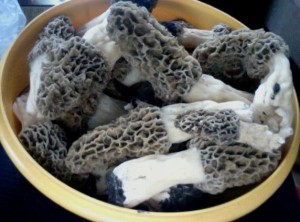 I found these morels under the dead elm tree in my backyard.  The total haul was around 8 pounds. Not bad. These retail for $40/lbs. and are only available during late April and Early May. No one has figured out how to cultivate these yet. They can be found by dead elms and usually like wet areas.  Make sure the mushrooms you pick are indeed morels. Here is a website to help you identify the real thing.

Also, make sure you clean your morels immediately after they are picked. I snoozed on this and found some maggots eating away at mine within 5 days.  Unfortunately, this meant that I had toss a couple hundred bucks worth of morels. I still chopped a few of them up, sauteed them in garlic butter, and threw them over a steak, even after the maggot attack. Nothing like a little extra protein on your steak.

These greens were picked on May 30th. The spring mix has been doing great in my garden. They are super tasty and saves me money by not having to purchase bags of lettuce/salad at the grocery store.  With a week of highs in the 60’s coming up, there should be no chance of it bolting anytime soon. 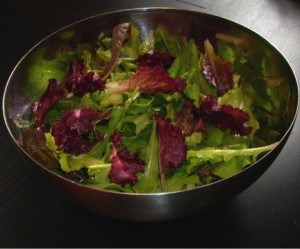 Fresh from the garden.

This is the first post on AgriDude.com  This blog is going to show multiple peoples gardens from different states in the US.  AgriDude.com will provide information about our experiences in the garden as a resource for others to use.  Please check back often to see our updates.  There will be plenty!  Also, please share this site with others and if you have interest in blogging here, let us know.